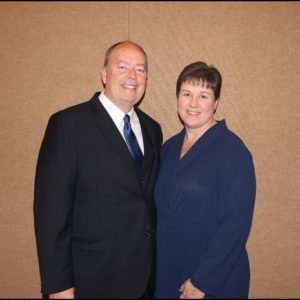 (Norfolk, Nebraska) Scott Jarman of Jarman Auctioneers and The Auction Mill has been elected President of the Nebraska Auctioneers Association for 2022-2023. Scott graduated from the Missouri Auction School on February 27, 1987, and began a 1st generation auction career working for DJ Sanderson Auctioneers. Scott has contracted with several auction companies in the last 30 years and his love to work in a live auction ring has never stopped. Besides working live auctions, Scott donates many hours conducting fundraising auctions for non-profits. Some of Scott’s fundraising efforts have benefited Team Jack, Nebraska Heart Association, National Wild Turkey Federation, Endless Journey Hospice, Italian American Society and many more.

He is married to his wife Michelle, and they have three grown children, Taylor (Jerod) Schoneman, Justin Jarman and Ashley Jarman, and two grandsons Graysen and Grahm Schoneman. Scott and Michelle reside in Cedar Bluffs, NE. His election, along with Michelle, his wife, who was elected as the NEAA Auxiliary President, was announced at the 73rd Annual Convention held at the Divots Convention Center, Norfolk, Nebraska, April 29-30, 2022.